What does Continential Breakfast mean to you ?

So When I originally started offering breakfast I knew I need to be careful how on I offer it and then define it, since I do not actually cook breakfast for guests.

I choose Continental on the options list as Its the lowest choice and no custom option to define.  There are tick boxes for some items.

So far its been fine and guest are happy to use the second fridge marked Guest and cook for themselves.

I have since discovered I seem to be wasting both money and food, as they seldom use the supplies and even when I buy some thing extra for them it just ends up in the bin.

Curious to see what others in the West to Central  EU region consider as continential breakfast so I can tweak my restock list.

My guest are mainly weekends or long weekends so Thursday - Monday check out. so I would have a max of 5 people over the weekend  between two rooms.

Typically in fridge I include as basics :

Lately on occasion if I see special offers I might also throw in :

I have about 10 different forms of cereals from porridge, to kellogs range of granola, bran flakes, frosties, cornflakes, Weetabix, alpine mix.

I have typically two main coffee, decafe and normal. with option to use a metal coffee filter for filtered coffee from around the world I sometimes buy.

And of course being Irish , I have tea bags and some green tea.

I also did up more YouTube videos and included a Kitchen and Breakfast walktru which I usually send to them via WhatsApp.

Would be nice to have option under Photos to have a video section  where you could link YouTube videos. 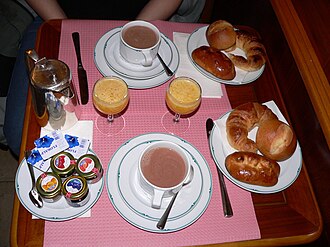 A "continental breakfast" for two people

According to Merriam-Webster, a "continental breakfast" usually includes coffee, jam, fruit, and baked goods such as bread and pastries, items chosen because they are shelf-stable, and can be served in portion sizes that are appropriate for large groups of people. The term originated in Britain in the mid-19th century, first used in 1896 public hygiene book The Sanitarian, in which "continent" refers to the countries of mainland Europe, though the idea had been around for a few decades as American hotels endeavored to appeal to the changing tastes of the emerging middle class and European travelers visiting America. The term refers to the type of breakfast found in places such as France and the Mediterranean, which is lighter and more delicate than the typical full English breakfast, which tends to consist of a large plate of eggs, bacon, sausage, toast, beans, and roasted mushrooms and tomatoes, and American breakfasts featuring eggs, breakfast meats, pancakes, potatoes, and toast. Continental breakfasts are also more cost-effective for the establishments serving them, because they require fewer staff to prepare them

I have a continental breakfast, and really it is very basic.

Muesli and Oats with milk from the farm if they like. And home made yoghurt only on request.

The milk is not a standard provided item, since many don't drink Farm Milk.

It is very hard to cater for all those different diets, like egg free, gluten free, nut free.

But: if I know some time ahead, and people do stay longer then one day, I ask them what their wish is and I will buy in extra and if the diet is really different, I can make it myself. Love cooking and baking!

If you offer all those other foods as a free gift then you will probably add extra to your unit price? If not you may lose money.

I do cater for an other platform and they have a breakfast added every morning. But they pay extra for it and is included in the total price.

You could make a template with option A or B for BdC and people can answer with a message which option they prefer.

. But they have to read beforehand, and often people don't - or are simply out of range. Specially for bookings done just before arrival it is very hard to cater for them if you live rural. For townies it is a different story.

The template option is a good idea to start with, I think.

Yeah while I have yet to do a spread sheet for cost analysis, I suspect considering some bookings are discounted so much stacked that the cost of the shopping for that week or weekend is more than the net rate received from one of the bookings.

How far away are you from shops to buy things? And do you have a choice of cheap vs expensive purchase?

We don't have lot of competition here where we live, overall it is expensive. I have to travel for one hour to buy bulk and cheaper.

Let us know what you came up with, Barry.

Unless your guestrooms are far from the nearest breakfast restaurants, our guests prefer to eat breakfast in our local town.

In our downstairs guest suite, we provide:

Plus, we offer our guests large paper coffee-cups (with plastic lids), so they may take their hot coffee with them after morning check-out.

We do not allow guests to use our house's upper-floor main kitchen to cook their meals.

Yes Like Don, we are very similarly matched with 90% of those same offering, minus the pastries and fruit. I usually only get two choices of sliced pan bread , white & brown. on rare occasion if I see bagels cheap I add them as an extra. I do not drive and completely reliant on delivery services or taxi to and from super market. There is a the local small grocery, and most seem to go buy there own choices there.

Barry:  I am also handicapped, and my wife is the only car driver in our home.  But here is a suggestion:

Ask your nearest Dublin market, if they will set-up a special "Brook Ave" breakfast discount package for your arriving guests: Eggs, milk, cheese, bread, fruit, etc.  Your guests would need to stop at that market and pay for their food before arriving.

Then, your guests would only buy the breakfast items they want, as some guests' diets are gluten-, dairy- and meat-free.

May give that a ponder for next season.

"I have since discovered I seem to be wasting both money and food, as they seldom use the supplies and even when I buy some thing extra for them it just ends up in the bin."

My Studio apartment has a complete  kitchen so guests can prepare their meals if they please.

I do not offer breakfast....but guests can prepare it....

In my fridge I have for my guests...juices, milk, eggs, butter, home made marmelades, yogurt, home made lemonade and fresh fruits from our garden.

I have a coffee machine, Greek coffee of course, different kinds of tea bags and organic tea from our mountains, organic honey, cookies, cakes, bread.

In my cupboards I have all kind of herbs from my garden, spices, salt, pepper, extra virgin oil, spaghetti, rice.

All these offered with a pinch of love!!!

Breakfast for me is complicated so I prefer to leave this to my guests....

Oh! I forgot, wine is also offered and when cooking Greek specialties...my guests highly appreciate it....

Hi Barry, I am not operating far from yourself. I offer a free breakfast to offer more and stand out against competition. I do this in units we have in Ireland and the UK. We offer similar to yourself but stay away from meats requiring cooking.

So a typical is cereal, bread, jams, butter, coffee pods, tea, milk, fruit, yogurt and juice. It works well in my opinion and I get high occupancy. But I also offer a cost sensitive offering and imagine this helps with occupancy !

It can be hard to look at waste but if you set aside X per week then its easier to accept this as the moment you dont stock something you hear about it. I use same day delivery when needed.

Exchange ideas, advice, and take a break with fellow partners from around the world.